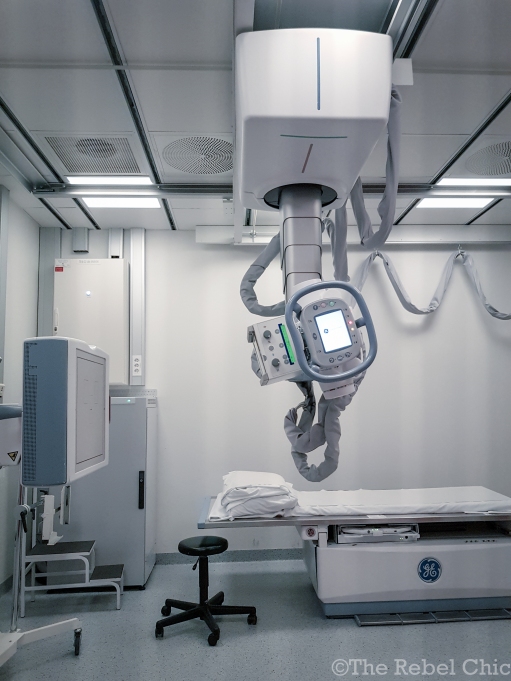 One of the x-ray labs at SUS

In the past few weeks, I was at my very first OJT at Stavanger University Hospital. I was assigned at the radiology department to take x-rays of patients coming back for a check up. The lab that I was assigned to during the first week is a big one and the most common examination is the pelvis and hips. The patients are mostly elderly and adults, though once in a while we got babies and toddlers too. The first day was the busiest because we had like 30 patients during the shift. Well busy for me since it was my first time. Also, I am a student so I cannot just take all the patients and besides, first day is mostly observation for us students. However, after lunch my supervisor let me take atleast a couple of examinations.

Moving on, after a day I was allowed to both take my own x-rays and to assist the radiographers while they lecture me about the protocols in the department. I found out that there is a difference between theory and what is practiced in the hospital. Also, the hospitals have different set of protocols too, so it is important to read and study them. My supervisor is a hands on one which I appreciate a lot because I heard that some of my classmates had supervisors who did not care about them. Anyway,  she made sure that I learned something from her tips and advice by letting me work independently while she was standing in the back. She only interfered when she saw huge mistakes but other than that I was allowed to do whatever I want as long as I was working according to the guidelines and protocols. At the end of the shift, we talked and discussed what things that I needed to be better at.

The OJT was only three weeks and I can say that I have learned a lot when it comes to working in a hospital, patient care and interaction, the department’s administration routines and radiographer as a profession. The experience has also proved and shown me that working as a radiographer is more than pushing the button. Yes there is the button but it is not the only thing about this profession. Like for instance, an x-ray technician should have knowledge about anatomy, radiation physics, medication, nursing and elderly care.

Other than my supervisor, I also got the opportunity to work with other radiographers in the hospital. I found out that the seniors use some techniques that the newer generation would not. I am grateful that they have shown me how to for example do the projections the other way as well.

To end this post, I want to thank all the radiographers and radiologists who I’ve worked with in this short OJT period. Thank you so much for your knowledge, patience and kindness.

Published by The Rebel Chic

Cristina is in her 30's. She grew up in the Philippines and moved to Norway when she was 19 years old. She is currently working in Bergen as a health care assistant. During her free time, she would go out and explore nature in the nearby areas alone or with friends and share her adventures on her blog. She dreams of conquering each and every mountains of Norway and take photos of the fjords and wildlife. She also wants to explore portrait photography. Her gadgets of choice are smartphones and SLR cameras. Her blog missrebelchic.com serve as er online book for her family, friends, acquaintances and people who share the same interests with her or for those who just need an inspiration. So basically, her blog is not only for photos but for musings as well. She also wants to inspire people to go out in nature. Disclaimer: All photos in this blog are taken by me a.k.a. The Rebel Chic unless stated otherwise. View all posts by The Rebel Chic