If you’re living in the countryside, expect that you won’t be able to see your neighbors every day because of the distance between their house and yours. Well unless you pay them a visitor of course, but it depends if you have the time.

Yesterday, the dog and I went for a walk. Took the opposite way because I was also going to check our postbox. While walking, I saw the neighbor number 1 observing us. I didn’t wave back but I smiled. I’m not sure though if he smiled back because it was raining. Then it began raining even more so we hurried up. On the way, the dog stopped in front of neighbor number 2’s property and then the dog began sniffing the place while I was a bit preoccupied by my Pokemon GO game. All of a sudden, I heard a loud knock on neighbor number 2’s window. She looked angry at us and she was signaling that the dog should leave her property. I didn’t panicked though, but I got stressed. I immediately pulled the dog out of her property and I checked for any signs of poo. Nothing there, but I think the dog marked a small spot on the on the property. I smiled and waved at neighbor number 2 but she just rolled her eyes on us. Neighbor number 2 by the way is an old lady, around 80 years old something and according to the old owner of our house, she is from the east coast. She doesn’t live in this place but she is here once in while for vacation.

To be honest, I’m still bothered. How can an old lady be so angry like that? Is it because she’s a cat person? Or, maybe she had a bad day yesterday? Who knows? I hope that it’s nothing personal, really because after all we are living in the countryside and neighbors should really get along.

They’re here again to invade our pavements, restaurants and city. No they’re not on war. We are not on war with them. They walk in pairs, groups or solo. Cameras, especially the system ones are a common sight with them. Do not forget the maps and the translation devices too. Some of them know where they are heading and some get lost. Everything that we find mundane in this city, they find it exciting and interesting. Because of their curiosity about history, they fill up the museums, churches and souvenir shops.

Some locals would probably find this season annoying. Perhaps because of the amount of tourists that storm in to Bergen. In terms of the areal size, Bergen is not a big city compared to NY, London, Barcelona and etc. So a cruiseship or two will somewhow make the city center look overpopulated.

If you would ask me how I feel about it, I think it’s great that they want to explore Bergen/Norway. Tourism is also good for the economy. My only concern regarding the cruiseship industry is the pollution that comes from it. I hope that they’ll fix that too.

If you will ask me when the summer season is in Norway, I’ll say in the month of May. This is the time of the year when temperature can be so high as approximately 30 plus degrees. Hence, people go out in shorts, mini skirts, and bikinis. June is really the start of summer here but it is usually rainy and cloudy. Not to forget the lower temperature as well!

So anyway, before the sun hides from us again, time to spend time under the sun or at least appreciate it. 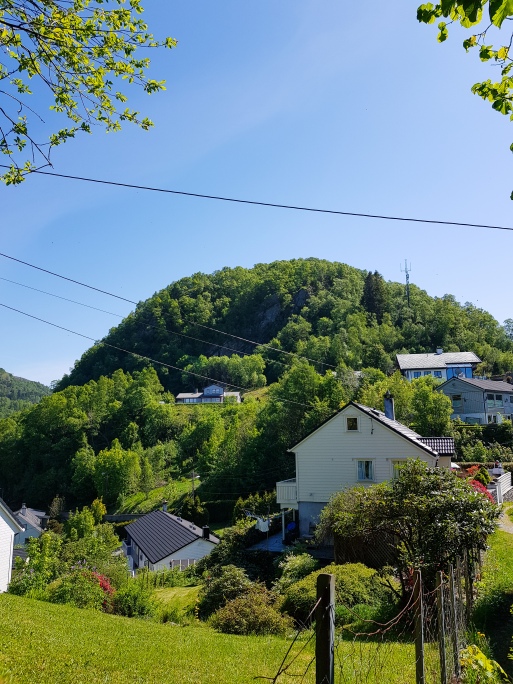 Before I hit the sack, I just want to share this photo of my hubby. I’m sure that he’ll protest once he sees this but I’m just proud of him. Today he worked alone on the installation of the laminates and it amazed me how he put his 100% on this task. You see, doing something that you don’t normally do is not that simple. If I were to do this, I’m sure that it will take me days to complete just a small part of the room.

This is one of the things that I noticed with the Norwegians in general, they love to renovate their houses/flats. Of course who wouldn’t love to have a cosy place if you are living in a cold country. Since the manpower is expensive here, they do the reparations and renovations mostly by themselves. Well except for the electricity and piping though. You need professionals to do that or else you wouldn’t be allowed to rent it out or sell it for a good price.

Anyway, thanks for dropping by and reading my entries. Have a great week ahead. 🙂 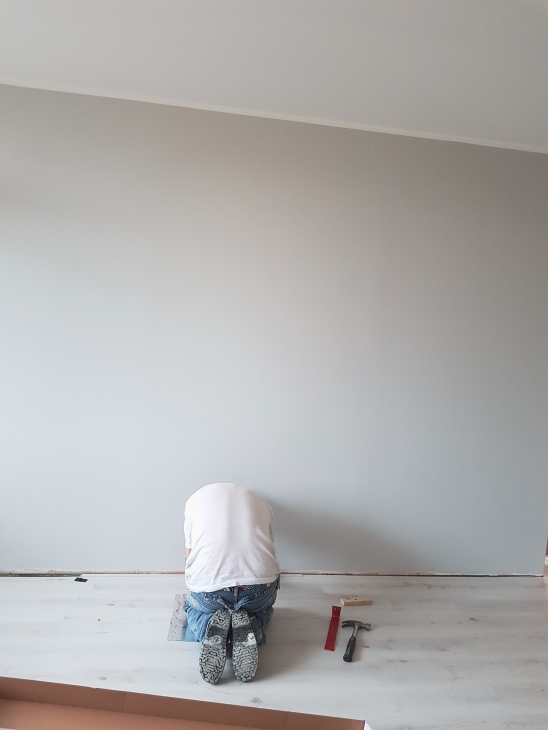 Let me introduce Molly. A Norwegian forest cat from Odda Norway. My sister adopted her a couple of months ago. She’s a very shy cat and cautious at first, but once she sees that you’re not a threat, she’ll try her best to catch your attention. 🙂

When my partner’s dad saw my FujiFilm Instax Mini 8 camera, he went to his office and came back with a Polaroid EE44 camera. He said that I can use it because no one is using it anymore. I felt like I won the lottery or an auction because I love vintage stuff especially vintage gadgets/technologies.

Polaroid EE44 is an instant analog camera. The concept is simple. You take a photo, then the camera develops the photo right away. I’ve tried to “Google” this camera and I found out that there ain’t much information about it. I found out though that EE44 is from 1976.

Since this is an old camera, I had to study the controls first. The problem is no one has the instruction manual anymore so again I turned to the internet. Fortunately, I found some videos and more information about this analog camera. However, Polaroid has discontinued the production of the type 80 films (which I think is sad). But it’s not the end for the EE44. There are lots of tutorials online on how to use other films (like for instance Fujifilm 100) instead.

There was only one shot left in the camera so after learning the controls, I aimed at a beautiful scenery and pressed the button and hoped that I’d get a good picture. Then I waited for a couple of minutes and I pulled out the film. Unfortunately, there was no picture on the paper but only the chemicals from the paper. Then it occurred to me that I forgot to check the batteries! But even though I remember the batteries, I still won’t be able to change the batteries because that would mean opening the camera and exposing the remaining film.

I got disappointed because I lost my only shot but as I’ve said earlier, it’s not the end of the EE44. There are endless possibilities here, we just have to be creative and be patient with troubleshooting.

Earth is not just a planet. It is our home and our one and ONLY home in the universe. Therefore we should take good care of it because this is the only home we have. I don’t care if you have the largest mansion or if you are the richest man in the world. If you do not respect nature then I suggest that you find another planet to pollute!

The pictures below were taken on the 2nd day of Easter. Hubby, Zorro and I went to Kaland Austerheim to celebrate Easter. We were fortunate enough for the sunny weather during that weekend. A very good friend of mine visited too, so we had a wonderful Lenten season this year.

Then there came the mood breaker. When we were walking along the shore we found some plastic trash! There’s the plastic grocery bag, a plastic bottle, small hard plastic bits which I could not tell what and smaller plastic bags! Instead of just sitting and enjoying the view, I picked up the trash because I cannot take it and never would I let these wastes get back to the sea. It is just painful for me to imagine that animals can die because of these plastics that we have found.

Anyway, have a nice day and happy Earth day everyone!

It seems that Mother Nature cannot decide whether or not to welcome hopeful Spring or to just stay with cold hearted Winter.

I think she is kinda caught in between…

You cannot absolutely go wrong with tea, bread and jam for a light supper. A little bit of decoration can also make your afternoon tea into a cosy experience.

Toasted bread, jams and a pot of green tea.

*This is my take on The Daily Post photo challenge, A Good Match.